Week6 : Implementation of simulation program by SBSCL , corresponding to the model including the species in listOfParameters and visualization of steady state analysis

1. What I did this week
I finished following tasks.
1) Implementation of simulation program by SBSCL
This can let user get the option to execute simulation because the algorithm of numerical integration by SBSCL is different from COPASI.

2) Corresponding to SBML model including the Species in listOfParameters
I assumed all species are included in listOfSpecies last week. However, my mentor, Matthias Koenig, advised me that some models( such as the models for Flux Balance Analysis) include the species in listOfParameters. This week I finished the implementation of simulation and parameter estimation by COPASI corresponding to such models.

1.1 Demo of the implementation of simulation program by SBSCL 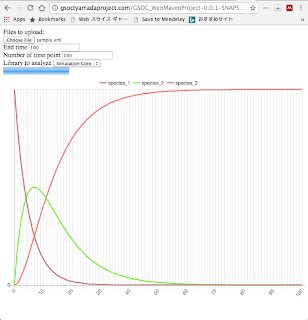 1.2 Demo of the implementation corresponding to SBML model including the species in listOfParameters 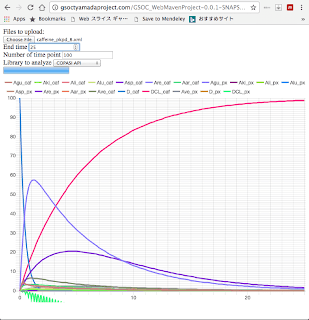 Fig1.2.1 Simulation for Caffein model( examples/Simulation/caffeine/caffeine_pkpd_8.xml) which is contained species in listOfParameters. Each line refer to the parameters whose status in COPASI is only "ode" 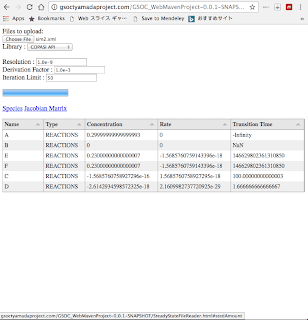 Fig. 1.3.1 Visualization of Steady State Analysis : The information of each species 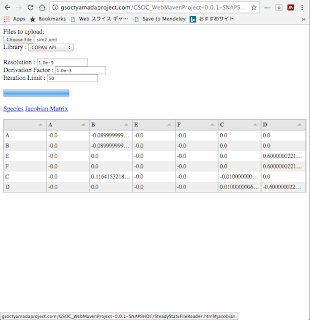 [Discussion]
1) Implementation of simulation program by SBSCL
I finished the simulation program by SBSCL. However, I also suggested the program by libRoadRunner last week. I tried to implement this program. This library prepare the bind of C,C++ and python. Therefore, I must prepare the python code to execute simulation and execute it from Java or prepare the Java bind of this library. The former is not preferred because of security issues and management of python version in my project. The latter is pretty difficult because compiling of this library with CMake was currently failed. Mentors and I discussed this point and we conclude that I will implement it after the developer of libRoadRunner prepare Java bind or after I finish any other tasks in my project and then I will prepare the Java bind using Swig or JNA.

2) Corresponding to SBML model including the Species in listOfParameters
I finished the simulation program by COPASI for this issue. Actually I have already implemented the program by SBSCL for this issue and following figure showed the result using same model in Fig1.2.1. 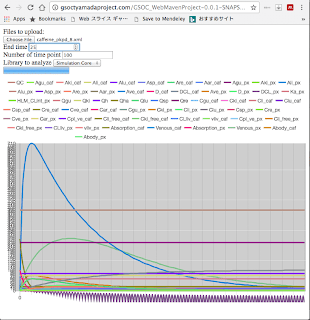 Fig 1.4.1 Simulation for Caffein model( examples/Simulation/caffeine/caffeine_pkpd_8.xml) which is contained species in listOfParameters. Each line refer to the parameters whose attribute of Constant  in SBML model is false

As you can see it , more species than the result of COPASI is shown in Fig1.4.1. The main reason being that the criteria to determine species visualized in client side is different between my implementation by COPASI and SBSCL. I should discuss it with my mentors and solve this problem.

3) Visualization of steady state analysis
It is sometimes significant to get the actual value of each result. However, the results of Fig1.3.1 and Fig1.3.2 do not give intuitive result. Therefore, I believed that  UI of both graphical result( like simulation graph) and numerical result( like Fig1.3.1 and Fig1.3.2) are significant for my project.
Current implementation of each analysis covers following Table 1.

Numerical visualization UI for Simulation and Parameter Estimation can be based on COPASI UI.
Regarding Graphical visualization UI for Steady State Analysis, I supposed the direction field to show the trajectories in phase plane is good[1]. Direction field shows each trajectory which is unit vector in phase plane. Using graphical view of this result near from steady state point, we can intuitively understand flow near steady state point.

2. The task of next week
I planned following 2 tasks.

1) The client side UI to change the parameters in model ( not hyper parameter of analysis such as endpoint in simulation), such as initial value of each species. The potential hurdle is the dynamical creation of html.
2) Corresponding to Red blood cell model[2] which is an example of large model suggested by my primary mentor, Andreas Draeger, to check my implementation can work correctly.

Week12 : Download widget was created and all javascript code to execute ajax transfer is changed based on JQuery 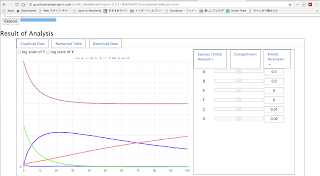 Week9 : Numerical table of the result from simulation and parameter estimation 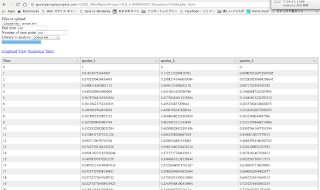 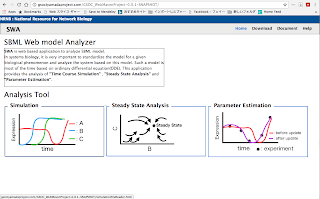 Hi all 1. What I did this week 1.1 The minor implementation discussed last week. I finished following implementation discussed last week. 1. Adding Run button 2. Setting the form to change x axis to logarithmic scale 3. Setting visualized expression of each species to same result between COASI and simulationCore 5. Pop-uping the species ID when user hovers the mouse over the plot of expression 6. Setting the form to change the tolerance in simulation Regarding "4. Grouping species, parameters and compartments in UI of changing these values" , I try to implementation from tomorrow. 1.2 Designing of top-page and simulation html I used bootstrap to design html. This design can change responsively when the browser is changed or the space of canvas is changed. 1.3 Demo of design Fig 1.3.1 Design of top page Fig 1.3.2 Design of simulation page Fig1.3.3 Design of simulation canvas and parameter change widget [Discussion] 1) Current design The
続きを読む